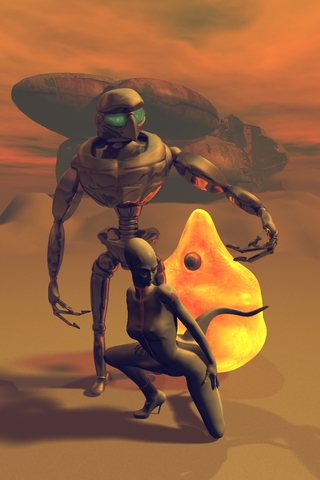 SF writer Arthur C. Clarke invented communications satellites in an article in 1945. Isaac Asimov practically did the same with faster-than-light travel. A large number of the scientists responsible for sending rockets to Mars say their inspiration came from Ray Bradbury's The Martian Chronicles. Alduous Huxley and many other writers predicted cloning, decades before Dolly the sheep.

In his 1953 short story "The Golden Apples of the Sun," Ray Bradbury described a space mission in which a rocket is sent to collect a small chunk of material from the Sun using a solar "scoop." Almost half a century later, NASA launched the Genesis probe into deep space, where it spent 26 months collecting matter from the Sun before returning to Earth.

This web site is your online guide to the science ideas, theories, inventions, important events, and social changes that appeared in science fiction before they were eventually embraced or conceived by the scientific community -- from artificial intelligence to the Internet - as well as those that were known only to specialists (e.g., black holes) before they inspired the SF fiction that brought them to widespread attention.